The Moe the Merrier 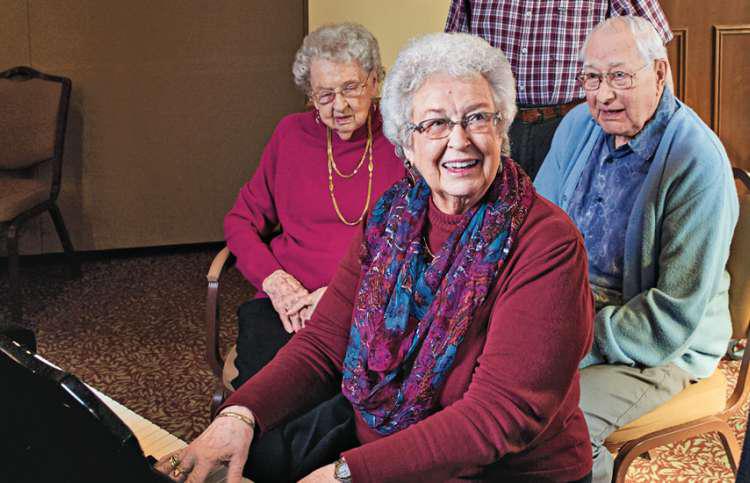 Ask Mark Robinson about the secret of the Homestead at Rochester's warm, welcoming spirit and his answer is simple: Marilynn.

As in Marilynn Moe, an 80-year-old resident of the senior-living and care community Mark manages in Rochester, Minnesota. She's a woman on a mission: making sure every one of her 120 fellow residents feels at home. No one there is forgotten. Marilynn sees to that. She seeks out anyone who seems a bit down and sits with them, asking about their grandkids or a favorite TV program.

Folks at the Homestead, owned by Volunteers of America, a faith-based nonprofit, consider Marilynn an angel, Mark says.

He fell for Marilynn's charm offensive in 2012, the day he came to interview for the job. He was standing in the hallway, hoping he didn't look as nervous as he felt, when a stylishly dressed woman walked right up to him. "Good morning," she said. "I'm Marilynn. I hope everything works out for you." She gave him such a warm smile that he couldn't help but smile back, nerves forgotten.

He got the job, and it didn't take long for him to realize what an asset Marilynn was. She'd arrived herself only two years before, moving from Fargo, North Dakota, with her husband, Darrell. They had a daughter who lived in Rochester. They moved into one of the Homestead's independent-living apartments, complete with a full kitchen.

It was a huge change, leaving her friends, her church family, her piano students. She loved teaching, seeing her students' skills and confidence grow. Would she find something as fulfilling at the Homestead?

"I could have just sat in my apartment," she says, "but I wasn't going to do that."

Marilynn wasn't trying to make a big splash. "I just wanted to make friends," she says. But it was more than that. All her life she'd done her best to follow Jesus' teachings, to love her neighbor. She wasn't about to quit now. Besides, it wasn't like Darrell, now 84, was sitting around either. He plays the trombone and joined two community bands.

Marilynn noticed that most people kept to themselves and didn't know much about their neighbors, so she started a monthly newcomers' get-together, inviting residents to her apartment for tea and homemade desserts. One by one they'd go around the circle and share a fun fact about themselves as an icebreaker. Soon people were chatting in the hallways and the common areas. Thanks to Marilynn, they had something to talk about.

She went to the monthly women's breakfast. To her dismay only three or four others showed up. She took over, each month lining up one of the residents to give a talk about a special interest, trips they'd taken, former careers, even more weighty topics like hospice care. She personally invited women to attend. It wasn't long before the room was packed.

She gave out birthday cards, using the Homestead's monthly newsletter to get the dates. Then anniversary cards for the married residents. She played the piano for church services and special occasions.

Marilynn didn't notice anything different about the Homestead, but others did. "These changes you're making, they're great," the residents would tell Mark. "Keep it up." He knew he wasn't the one who deserved the credit.

April 2012, Mark was in his office when the call came in. It was Darrell. Marilynn had had a stroke. The paramedics were on their way. The news hit Mark hard. What if she never fully recovered? He'd seen it happen too many times. With her family's permission the staff told residents. They said hundreds of prayers for her.

A week later, Marilynn was back on her feet—albeit with a walker. Her doctors were amazed. "We can do the rehab in stages," her therapist said. "Nice and slow."

Marilynn's reply? "I want the boot-camp version. The toughest one you've got." Her therapists were impressed by her rapid recovery. They said her lifetime of exercise and healthy eating had paid off. Marilynn says it wasn't her strength but the Lord's that pulled her through. "He's the ultimate healer, the reason I'm alive today."

Another week and she was back at the Homestead. No walker needed. If anything she seemed more energized than ever, giving tours to prospective residents, hosting the women's meeting, the newcomers' dessert klatch. Going to Bible class. Playing the piano.

That's what she was doing one day when a resident in his mid-eighties approached her. "Would you be willing to teach me to play?" he asked. "Please," the man's wife said. "He was always so busy with work that he never had time for a hobby." "I'd love to," Marilynn said. She met with the man every week. Slowly he progressed from scales to simple two- to three-note pieces until he was playing "Happy Birthday" and "Jingle Bells." "I wasn't sure I could do this," her newest (and oldest) student told her. "You gave me the confidence I needed."

Last year, Marilynn won statewide recognition for what she does at the Homestead from a nonprofit senior-services group—the Spirit of Aging award. She was chosen from more than 750 nominations. "Her optimistic view of life is contagious," Mark wrote to the selection committee. "She brings grace, beauty and gratitude to everything she does."